I love a good surprise!  And SURPRISED this dad was for this session!  It was his birthday and his wife coordinated a photo session featuring their soon to be doubling family.  They were expecting TWINS – so they would instantly double their family size when the little ones arrived!  They were going to find out if they were boys or girls so we went with some photos that would work for both and a pop of some red in the studio.

We met at Historic Oak View park which is the park near the studio and it was SUNNY and a little chilly and windy but gosh – we were moving and walking so much it actually felt really, really good to be outside!  We essentially had the park to ourselves (minus the goats who said hi) and this late February Raleigh, NC maternity session was the perfect one for me to start my 2016 with!

After spending some time at the park (and me oogling over mom Shara’s beautiful green scarf that she made – really impressed) we drove back to the studio for some studio portraits!  I LOVE, LOVE, LOVE that Shara wanted to try the red dress I had just recently gotten from one of my favorite maternity dress vendors Sew Trendy Accessories.  So brave and bold of her – and you know I love red but the red dress with her red hair was perfect!  AND also perfect was the few attempts throwing the gown that her husband did – one including throwing it AT her head.  It was funny when I politely mentioned that maybe throwing it directly at her head wasn’t the best idea;)  He did great though!  I am so, so, so happy with the results! 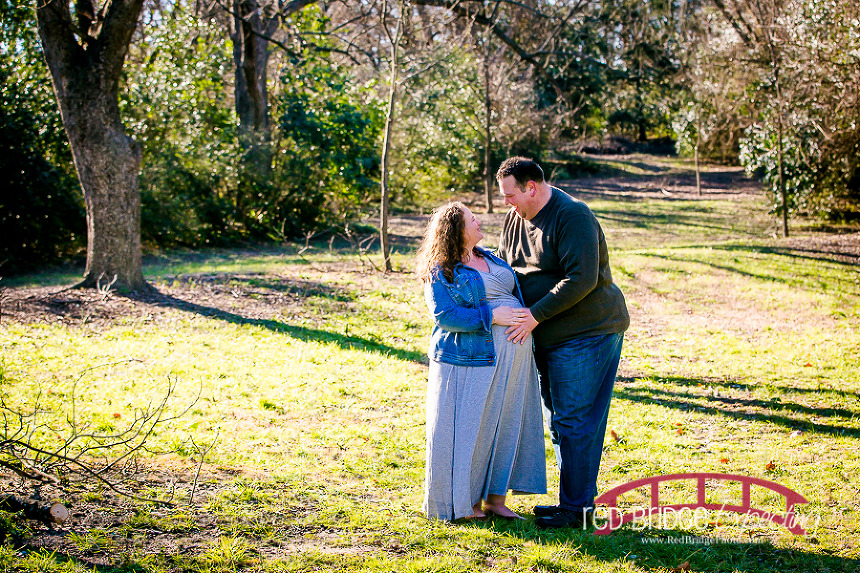