The day Jon called me to inquire about a shoot, I instantly knew something was up.  We first me Jon and Melissa at Jon’s sisters wedding a few years back.  We knew that it was only a matter of time then they would get engaged but who knew we were going to be a part of the proposal?!?!

Jon called me with the plan, well kinda.  He knew he wanted to propose and he wanted to do it at a photo shoot of the two of them but he didn’t know the specifics of HOW in the shoot he would do it.  I am addicted to Pinterest like a lot of people out there are and I recently saw a photo shoot idea in which it appeared as if the guy was in the process of telling his potential bride how much he loved her and what he loved about her.  They wrote messages back and forth and then voila’…… the last message he writes to her says “Will you marry me?”  That way the silent portion of photography doesn’t miss the typical vocalness of the question that typically happens during these events.

Well, that was the plan – we would go through the shoot and at one point and time I would suggest that we stop and do the love note thing.

But first, we took some casual pictures at a park that I had never been to before.  It was a river that ran off of falls lake and it was beautiful.  The sun was perfection the couple is darling.  The weather was PERFECT.  The only thing that wasn’t was the scared photographer SHOULD have prepared a little better for scaling and climbing rocks and up and down ledges.  I only wore flip flops and couple that with being scared to death to drop my camera IN the rushing water….. UGH torture and nervous nelly I was (but probably not as much as Jon).

Well, we went to a few spots and explored for awhile then I spotted the perfect place with the perfect light.  We meandered over and set up a few more shots and then que photographer pitching cheesy love note idea!  Melissa looked and Jon and was a little like huh?  But since Jon was all gung hoe – well, so was she.  They went back and forth and the plan was when Jon got to the moment that he wanted to propose he would nod to me.  I would then get some pictures of him writing it and comment how that is a GOOD one…. you better stand up for that.  Then I acted as if I needed to get something from my camera bag (the ring) and then acted like I needed to fix the chalkboard because it was crooked or something (that was when I would put the ring box in his hand.)

AND BAM ….. well, you can see it in the pictures!  Perfection of a proposal and perfection of a couple!  We are really looking forward to your May 2015 wedding at the Chapel Hill Carriage House!  Until then, enjoy a few of my favorites from this great Raleigh Engagement and Proposal shoot!  It was hard to minimize the favorites AND tell the story so bear with all the beautiful images!

Thanks guys and can’t wait to document your wedding day! 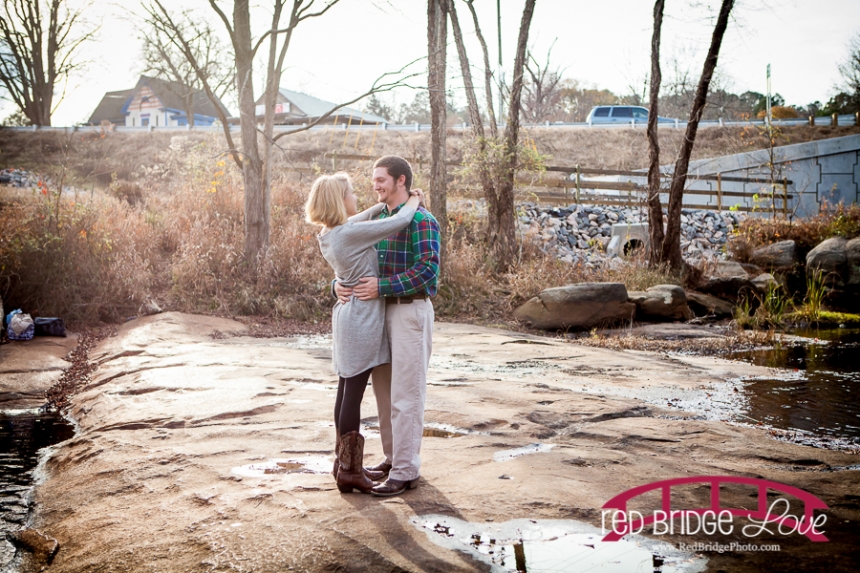