Long time ago before I had Red Bridge as a business and I was first starting out, I put it out to friends and family on my facebook page that I was looking for some models that would be willing to be photographed.  Toki was one of the people that stepped up and volunteered to be photographed.  Unfortunately, we got rained out not once but twice on the day we had planned our session and many years later when Toki got engaged to the perfect man for her – she called for an engagement session.  I met with Toki and Tim and we discussed the perfect engagement session for them.  It was all about Duke and since they were getting married on the persian new year which this year fell in March, we wanted to waste no time to do the engagement session.  They also requested some portions of The American Tobacco Campus in Durham, NC as they really wanted some Christmas decorations and lights in the scene for the session.

We started the session at one of my favorite places and a place that is very special to the couple – The amazingly gorgeous Duke Chapel and Duke Campus.  I always love the areas around the chapel and on the campus.  It really is a touch of new england type of higher learning institutions right in the middle of Durham.  The gothic structures throughout the campus are the perfect balance of new england and southern typicals.

Really, we found so many locations and the light was AMAZING that day!  Definitely a huge addition to this session was the light and how amazing it was.  It also was a bit chilly on this day and the warmth of the light helped fool us all as to how cold it was that day.

American Tobacco Campus was also amazing!  The Christmas lights had just popped on when we arrived and after a quick change of clothing, Toki and Tim were ready to continue the shoot!  We wandered and found some great spots to use the lights behind them as well as the tower was all lit up in its christmas light glory.  Really, this session was one of my favorites from December.

Enjoy some favorites from Toki and Tim’s Durham, NC Engagement session and wishing Toki and Tim all the best for their March wedding! 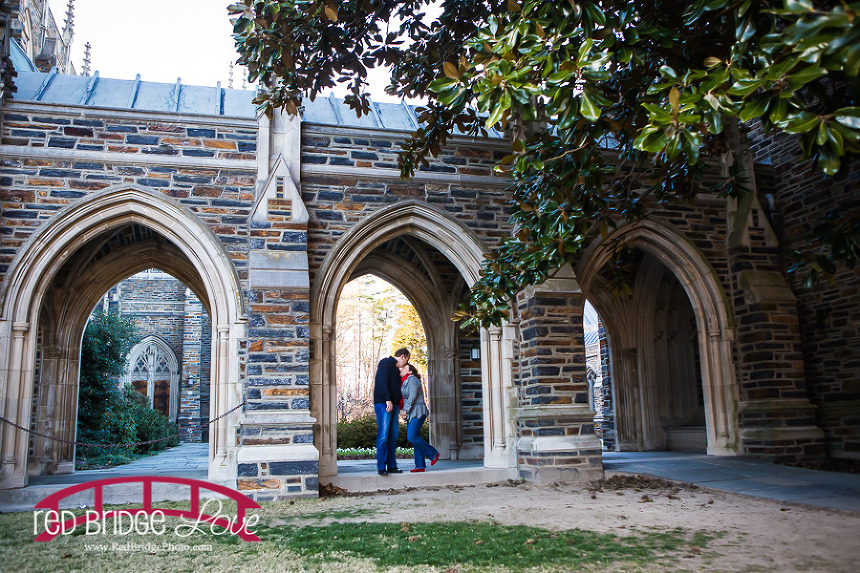